skip to main | skip to sidebar

I didn't have a lot of time for music this spring, so I decided to do a little video project. My goal was to take a song I love and match it to a film I love, and try to make the juxtaposition creative, organic, and fun to watch. It was an experiment in adding as much value as possible while changing as little as possible of the original works. Check the video below, I'm pretty proud of this one:

Damn, YouTube, who are all these people? Are any of them named Darren Aaronofsky or Geoff Barrow? I don't give a shit if they are, but that would be awesome if they had watched it.

I don't think there's any evidence that I could hurt any of the copyright holders financially, and sizable evidence that mashups, fan fic, etc, only increases the value of the referenced products, in much the same way that press coverage does. The artists involved may or may not like it, depending on their taste, but once your baby is born, you have no right to censor what other people say about her. This is a form of cultural criticism, however cheeky or referential, and however pitiful or tiny.

Here's one that slipped through the cracks.  The song is me, Evan, and Sean. It's almost entirely stolen. I made the music out of samples, noticeably Johnny Rivers and U2. The video is from the movie "CQ", directed by Roman Coppola. The lyrics refence James Bond and Indiana Jones at length. I don't know why it hasn't gotten busted, I'm guessing because it's too transformative for the bots to catch it. I think the simple act of juxtaposition is transformative but, let me tell you amigos, YOU CANNOT ARGUE WITH A ROBOT.


Posted by Ben Frankenstein at 6:19 PM No comments:

Yeah, motherfuckers.  The wait is over.  I (re)discovered that I have a blog, and I'll be damned if I'm not gonna post something.

So, apropos of nothing, the best dream I ever had:

I was somehow transported back in time and met Elvis Presely, holding a guitar and wearing a pink shirt like Kurt Russel in the movie. I was starting to explain that I was dressed funny because I'm from the future, but Elvis cut me off:

"It's OK, man. Wear whutcha like."
Posted by Ben Frankenstein at 4:58 PM No comments: 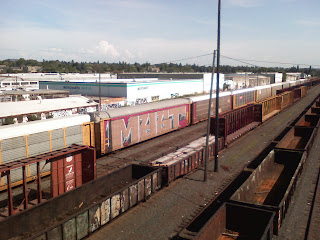 I walk over a trainyard every day. I see some good graffiti, but not much that's big enough to be legible on a cell-phone photo, even with full zoom. I saw this one last week, and the light was good.


I'm not sure physical copies of music has much of a future. I only ever seem to buy vinyl anymore. In fact, you ain't nobody 'less you got vinyl, and I've never put out any. I wonder what that costs.

Until I decide to pay to press up some records, I think virtual is gonna have to be the way, though I'm moved that you want a copy. I will do my best to make a lot of music easily available for free.

Travis Kincher and I both did lists of great albums; his thoughtful choices are RIGHT HERE. He makes even the M. Ward-children's-album-about-death idea seem pretty reasonable. I don't think kids really listen to the words much. Plus - worst-case scenario - they gotta learn about it sometime, shit. Remember when Mr. Hooper died on Sesame Street? I was sad for a little while, but I've gotten over it.

Anyway, I was gonna post a piece of music, but it seems like that is not an option here! I am annoyed. I can post a video, a picture, or a link, but not a song. So I can either save a song in a video format, which is a yellow on the Apathy Alert meter, or save it in a video format, synched to a piece of a movie, which at least makes the thing seem worth doing. So I shall endeavor to take that extra step in the next day or two. [I didn't - ED]

There is a column in NEWSWEEK where they ask authors to name their favorite books in a number of different categories. I've always thought the questions were pretty interesting, but I never thought of applying them to musical recordings, which is exactly what they did last week with Wayne Coyne of the Flaming Lips (unfortunately not available online, or I woulda linked it).

Wayne picked some dope stuff (all that comes to mind at the moment is "keep coming back to: Debut by Bjork", "wish I made: Velvet Underground and Nico by the Velvet Underground", and "kids should hear: Yellow Submarine by the Beatles"), and it made me want to make a list of my own.

These are my answers to the Newsweek questions:

An album that redefined the album: The Downward Spiral by Nine Inch Nails

The whole concept of a man's descent into self-loathing and suicide is a little obnoxious, but the sheer musical invention is devastating (to me, at least). On this record, metal, punk, prog rock, funk, and synth pop not only sit well together, but actually kinda sound like one thing.

An album that expanded the possibilities of music: Nail by Scraping Foetus Off The Wheel

One of the many JG Thirlwell aliases, Scraping Foetus Off The Wheel put out two back-to-back masterpieces "Hole" in 1984 and "Nail" in 1985. This one gets the edge for being the more consistent of the two experimental rock masterpieces.

An album that you keep coming back to: Transformer by Lou Reed

I don't think I'll ever get tired of it. There isn't a thing on it that I don't want to hear.

An album that I wish I'd made: Psyence Fiction by U.N.K.L.E.

DJ Shadow is one of the best songwriting DJs in the world, and he gets an amazing group of collaborators who manage to actually mesh with his style and do great work in about 80% of cases (way more than the average electronic-musician-with-guests album). Also, aggravatingly close to something I might be capable of.

An album about which I've changed my opinion over time: Enter the 36 Chambers by Wu-Tang Clan

I didn't like it at all at first. Then I liked "Wu-Tang Clan Ain't Nuttin Ta Fuck Wit". Then I liked "Method Man" and "7th Chamber revisited". Then I loved the whole thing. Now I can't imagine what I could possibly have had against it (I truly don't remember).


An album that parents should play their children: Oh No It's Devo by Devo

Their most exhuberant and maybe even childish album. Fun, poppy, positive, but twisted. I hear you can get Devo children's albums now, with Devo classics as sung by children.

Another post with new music by me coming soon. [no, it didn't - ED]

Gonna get right to it: Twitch of the Def Nerve: The Movie

What Apocalypse?
We Know Where You Live
Fly Beats
Audio Nasty
Just Another Victim

Before we get started, I wanna give a shout to the biggest influence on this video, Emergency Broadcast Network. EBN are Joshua Pearson and Gardner Post, two former RISD students who make music video collage with samples of politicians and pundits saying wacko shit on top of late acid-house breakbeats - I don't know what genre EBN are, but The MFF are in it with them. They provided the barrage of images that filled the video wall behind U2 on their "Zoo TV" tour - including their version of "We Will Rock You" with lead vox by G. Bush (the elder), one of their best and most well-known joints.

We always wanted to make a video movie in their style. Our first effort was the all-too-hard-to-top The MFF vs The Evil Dead (which has been viewed so close to 100,000 times on YouTube that I'm tempted to watch it a hundred times myself just so I can stop qualifying the statement). Though Twitch of the Def Nerve: The Movie might not be better, it is definitely longer and stranger. We hope you enjoy it!